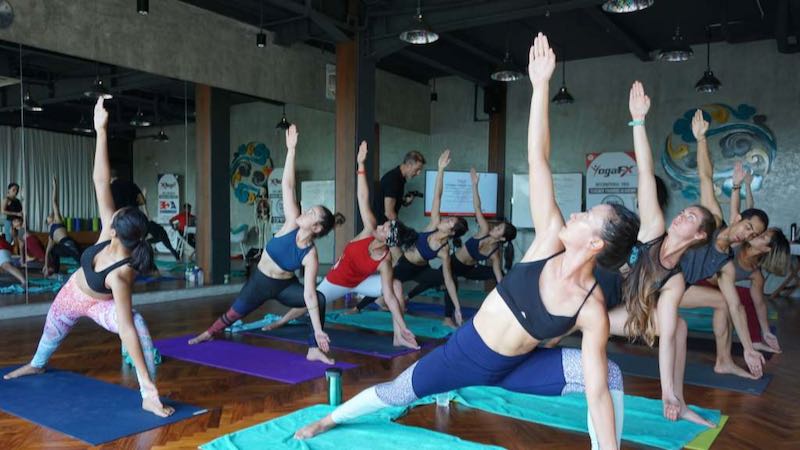 What Yoga Series Are The Most Popular?

Most forms of yoga in the West can be classified as Hatha Yoga.
HATHA SIMPLY REFERS to the practice of physical yoga postures, meaning your Ashtanga, Vinyasa, Iyengar, Bikram, Yin etc classes are all Hatha Yoga.

The word “Hatha” can be translated in two ways:

Hatha practices are designed to align and calm your body, mind, and spirit in preparation for meditation through breathing pranayama and Asana.

The yoga classes above only differ in their sequencing and asana subtleties.

The actual sequencing of their own styles is very similar, but all have their own “twists”.

For example, one great song can have 100’s of different covers. The same can be said with Hatha yoga, having many different sequencing variations. For example Astanga, Bikram, Yin, Vinyasa.

There is a total of 84 asanas in Hatha yoga, and it is possible that even some of the primary asana have their own modifications and style.

But all of the above series have their origin in Hatha. One song.

Ashtanga Yoga. This form of yoga is intensely physical and athletic. Ashtanga yogis practise a prescribed set of asana in a series. There are a total of 6 series the most well-known is the primary series.

The Astanga Yoga Primary series as with all of the Ashtanga yoga series, channel energy through the body using bandhas (locks). Concentrated gaze on singular points using Drishti (gaze) in asana, while controlling the breath (ujjayi) Classes typically begin with an invocation to the Indian Philosopher Patanjali chanted in Sanskrit.

What It Literally Means:

Ashtanga Yoga translates as “eight-limbed yoga” and refers to the eight limbs outlined by Patanjali in the Yoga Sutra, which include moral and ethical guidelines, postures, breathwork, sense withdrawal, concentration, and meditation. Commonly known as the 8 Limbs of Yoga.

What It Has Come to Mean:

Ashtanga Yoga most often refers to the system taught by Indian yoga master K. Pattabhi Jois. Sometimes called Ashtanga Vinyasa yoga, Jois Ashtanga comprises a precise series of poses done in sequential order, linked together with the breath. WE WILL TEACH you the Ashtanga primary series.

The word “Vinyasa” can be translated as “arranging something in a special way,”. For example a precise series of poses done in sequential order. In Vinyasa yoga classes, students coordinate movement with breath to flow from one pose to the next. Flow Yoga, Prana Flow and many, many other different yoga class names, could all be considered Vinyasa yoga. As is Ashtanga.

…Chaturanga to Upward-Facing Dog to Downward-Facing Dog commonly used throughout a Vinyasa class.
Yin YogaThis practice is designed to help you sit longer and more comfortably in meditation. It works by the stretching of connective tissue around the joints (mainly the knees, pelvis, sacrum, and spine).

A passive practises, Yin Yoga involves variations of seated and supine poses typically held for 3 to 5 minutes, accessing deeper layers of fascia. Yin Yoga was originally introduced by Paulie Zink and is based upon Tao.

By paying close attention to anatomical details and the alignment of each posture, Iyengar Yoga is the practice of precision. Poses are held for long periods and often modified with props. This precise series of yoga poses done in a sequential order method is designed to systematically cultivate strength. You will find that your flexibility, stability and awareness can be therapeutic for specific conditions.

Bikram yoga practice emphases a Hatha yoga sequence of 26 postures and 2 breathing exercises. Originally set in a heated room, designed as a rejuvenating exercise to strengthen the entire body, from head to toe.

It became popular in the early 1970s and is a recognized Hatha series.

Bikram Yoga is the world’s most popular Hatha series taught in over 700 Yoga studios worldwide.🌍

All original Bikram Yoga Beginning Series classes run for 90 minutes and consist of a precise series of poses done in sequential order (as are all of the Hatha yoga styles).

Bikram Yoga (named after its originator, as is Iyengar) is a Hatha series of 26 (chosen from the 84) postures, including two breathing exercises.

BIKRAM YOGA IS SUITABLE FOR ALL LEVELS…

…from beginner to advance. Hence being the most popular.

Bikram Yoga was made popular as hot yoga style, practised by many celebrities, as it still is today.🙂

The heat was shown to increase joint rotation, flexibility, mobility. Improving stamina, strength, coordination and many other health benefits.

There are now many other forms of “hot” exercise, including Spin, Pilates, Ashtanga, etc.

Having said that, the POPULAR MISCONCEPTION is Bikram has to be done in a hot (42c) room. This is absolutely not the case.

It is absolutely is the case that any yoga class in a cold studio will and does increase injury.

A warm or hot yoga room does and will always reduce the possibility of injury.  A warm yoga room will always increase the blood supply to your muscles. It will make your muscles more comfortable, supple and flexible, allowing a much deeper flow to your practice. Reducing the potential of a strain.

Bali is always a gorgeous temperature for yoga.

WE WILL TEACH YOU in a glorious, 30c to 32c every day. All-natural heat from the environment, carbon-neutral, no electric munching heaters, and no air-conditioning. Only natural cross-flow ventilation.

Up until today, all Bikram Yoga classes are still taught by Bikram Yoga Certified Teachers. These teachers have completed nine weeks of intensive yoga teaching training attended by Bikram Choudhury himself.
Bikram-certified yoga teachers are taught a very detailed, beneficial, instructional series and dialogue. They are very well trained to have to complete a 1000 Hours of Yoga Teacher Training in nine weeks.

However, the cost of 13 to 15 thousand dollars and the 9-week commitment away from home is now proving to be difficult for most.

…taught in over 700 studios around the world that at one time were all affiliated to Bikram Yoga.

As time passed many of these studios have renamed with their own brand, Hot Yoga NYC etc., and added other classes, Ashtanga, Yin, etc.

But all have their origins in the Bikram Yoga Hatha series. One Bikram class starts every 60 seconds at some part of the world and over 300 million have participated in a Bikram yoga class.

We will teach you the Bikram Hatha yoga beginners sequence.